Cross-Country skis are made in a wide variety of styles, each intended for a specific use and technique. We’ve stripped away the fluff and confusion to make buying the best cross-country skis a much more straightforward process.

Our list is filled with only the highest quality skis for cross-country use, whether you’re a recreational skier looking to stay fit or enjoy the outdoors, or a competitive personality that wants the extra edge when skiing for sport – we’ve got you covered here.

Remember to check out the Things To Consider section below for the low-down on all the specs you need to keep an eye on – don’t worry, we’ve made it as simple as possible!

Quick Note – You’ll see the word “camber” mentioned in a lot of the product reviews below. Camber refers to the arch in the profile of the ski. When it lays flat on the ground (with no additional weight), the ski will rise in the middle (where the binding is). This is designed to add a sense of “spring” to the skis for better performance. You can learn more about how to choose the right level of camber in the Things To Consider section at the bottom of this article.

For more of our top ski gear recommendations, check out the Best Downhill Skis.

As the lightest pair of skis on the list, it’s no wonder that these “race & performance” skis are best suited for fitness-oriented skiers. To be clear, these are part of the “skate” category, meaning that your technique will differ slightly from those using a more classic cross-country race and performance ski. You can learn the difference between the techniques in the Things to Consider section below.

At just 40 mm wide in the tips (43 mm wide in the waist), these are also the narrowest skis on the list. They are designed for speed and agility and would be a great choice for any skier, regardless if they are purely recreationalists or seek a performance ski for competitive cross-country skiing.

Take note, the base of these are waxable, meaning they will need to be maintained with a coat of wax for the best possible traction. For help on how to grip wax your skis, check out the Things to Consider section below. 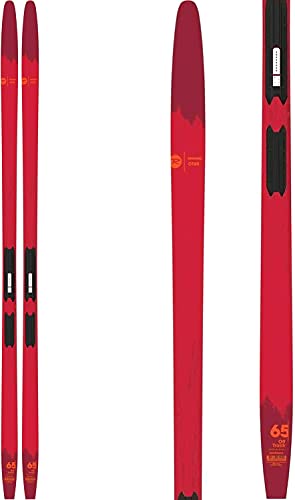 As one of the few single cambered cross-country skis on the list, these are the most versatile skis we’ve found. With a tip width of 65 mm, the Rossignol Evo OT 65’s are just slim enough to be used on groomed runs (where the tracks are a maximum of 70 mm wide) but also versatile enough to also be used on ungroomed runs.

The metal edges, while typically a staple of backcountry skis, help give the Evo OT’s the extra edge necessary (see what I did there?) to grip better in icy conditions. The skis also feature a single camber profile, which is normally found on backcountry skis, and provides a greater ability to carve when making turns on ungroomed and backcountry terrain.

The slight downside to having single cambered skis is that when you’re on groomed runs (in the tracks), you’ll lose some of the ability to glide when heading straight downhill the way you would with a classic Nordic (double) camber. 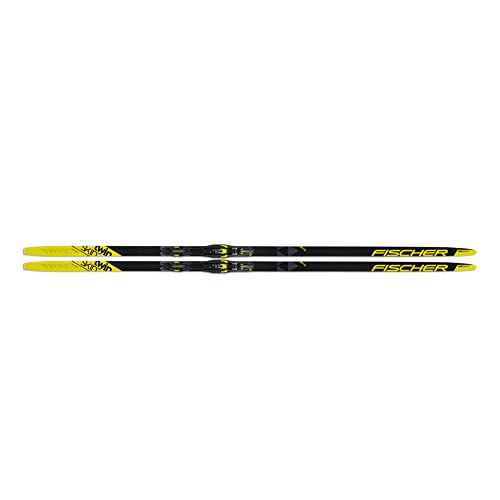 Cross-country skiers looking for reliable, everyday performance on groomed runs with  traditional tracks are in for a treat. The Fischer Twin Skin Pro skis are an absolute classic model with no frills, relying on a basic but perfectly executed construction.

With the 2nd narrowest tips on the list (by just a millimeter), the Twin Skin Pros are lightweight, stable, and come with bindings! The bindings can be mounted in multiple places to achieve specific results and are easy to manipulate without tools. Those needing more traction can mount them closer to the front for increased grip whereas skiers who desire more glide can mount the bindings closer to the rear.

The latter would be especially useful on these skis considering they have a single camber. Adding more glide would help offset some of the glide lost with a single camber while retaining the grip qualities associated with single camber for a truly balanced ski.

Recreational cross-country skiers who have their sights set on stepping up to competitions will be well equipped with the Salomon Snowscape 7 skis. Great for both casual and competitive skiers alike, these skis have all the features required of a race and performance cross-country ski.

It’s important to note that these are in the category of “classic” race and performance skis, not skate. The difference is primarily in technique but each type of ski has its particular nuances which assist with the technique being used.

The double camber in the profile of the Snowscape 7’s provide outstanding glide and is perfect for racing on both groomed and ungroomed terrain.

Explorers craving backcountry expeditions while staying light on their feet should strongly consider the Rossignol BC 120’s. Their mega-wide tips will help keep you afloat in even the deepest powder.

What makes the BC 120’s so unique is that they feature double camber, which is somewhat unusual for backcountry skis (they are typically singe camber for increased carving ability). However, the double camber is also (unusually) paired with a tip rocker, meaning that the tips of the skis are upturned. This unique combination means that what is lost in carving ability by the addition of the double camber is made up for by the rocker tips. The upturned fronts allow greater maneuverability and float in fresh powder.

It’s also worth highlighting that these are the only skis on this list that do not include bindings, which will need to be purchased separately.

Cross-country skiers who prefer the nuanced technique of skate skiing will love the Salomon RS 7 skis. Built to perform best for skate skiing on groomed tracks, these are an elite caliber cross-country ski for both athletes and recreational riders alike.

The single camber profile on the RS 7’s are perfect for increasing traction needed when skate skiing. These skis also feature a waxable base, meaning that they are a little higher maintenance than their waxless counterparts.

This is fine when conditions don’t fluctuate wildly and are stable above or below the freezing point, as they will perform much, much better than waxless skis. However, when the temperature is right at 32°F/0°C, you’ll find it’s quite troublesome to apply the wax. 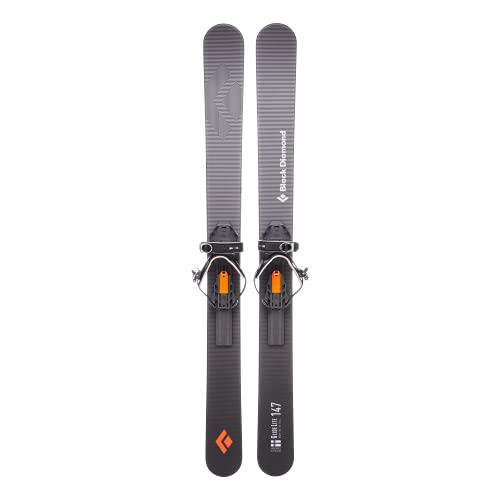 At a whopping 125 mm wide, these are the widest skis on our list and provide an amazing amount of float in deep powder and unpredictable backcountry terrain. They really do perform like a hybrid, allowing you to access more remote areas than you would with traditional cross-country skis.

The Snow Trekkers offer glide as well as any other ski while also sporting integrated climbing skins on the base so you can hike up any hill. The middle third of the underside of each ski has a special material designed to grip exceptionally well when climbing.

Cross-Country Skis are offered in 3 different styles, each with their own unique characteristics for a specific result.

Choosing the proper length of cross-country skis will be determined by your intended use/style of skiing. Refer to the sections below on how to find the right length, as each type/style of skiing has a different formula.

Getting the right length of Touring ski is typically determined by how much you weigh, but can be altered depending on your skill level and preference.

Use the chart below to determine the right length for your Touring Skis.

Use the following formula to determine the proper length ski for race and performance skate skiing.

Sizing systems are proprietary and vary from maker to maker, refer to the manufacturer’s sizing specifications.

The width of skis are measured at 3 points: the tip (front), the tail (back), and the waist (middle).

If you’re looking for a classic touring ski, the width of the tips should be no wider than 70mm since that is the maximum width of ski tracks. If you want the ability to ski both backcountry terrain and groomed tracks without buying two sets of skis, you can do this by purchasing a Metal-Edge Touring ski that, again, has a maximum tip width of 70mm so it fits the tracks. Just realize that your backcountry performance won’t be as easy going as it would be with a wider ski.

Performance and skate skis are usually narrower than 70mm to reduce friction with the ground.

Camber refers to the arch in the profile of the ski. When it lays flat on the ground (with no additional weight), the ski will rise in the middle (where the binding is). This is designed to add a sense of “spring” to the skis for better performance.

Camber is also directly related to your weight and it’s important to choose the right size so that the camber will perform as prescribed. There are 2 types of camber found on cross-country skis:

Most cross-country (XC) skis are Double (Nordic) Camber. There are two key reasons for being designed the way they are.

Single Camber, although much less common, can be found on some Metal-Edge Touring skis for backcountry use. The arch is less pronounced in order to provide more even weight distribution for smoother turns when carving.

In order to propel the skier forward, friction is necessary. Cross-country skis have either a waxless or waxable base (underside) to achieve its intended results.

Waxless skis are able to grip the snow with a textured pattern in the middle third of the skis and is the most popular kind of base available. Although the middle of the ski doesn’t require wax, the tips and tails of your skis do require wax for the best results.

Waxable skis require more maintenance and stable temperatures (either above or below 32°F/0°C) but will perform much better than waxless skis. For this reason, waxable skis are best suited for those who want to compete against others and need the performance boost.

However, if temperatures fluctuate a lot or are right at the freezing point, then applying wax becomes very difficult and the skis will not perform as well as a waxless base. Check out this article to learn how to apply a coat of grip wax to the base of your skis.

Bindings are the device that keeps your boots mounted to your skis. They feature a mechanism that holds you in place and can be switched to spring your foot free.

For more of our top skiing gear recommendations, check out these popular buyer's guides: