Along with seven other divers I sit on the edge of the skiff in full scuba gear, my regulator is in my mouth, my fins are on the seat. The boat captain studies the area and current for the best place to drop us off. Once in the right spot, the divemaster asks, “Everybody ready?” then he counts 3..2..1..Go! We fall back off the side of the boat into the water.

I descend head first, with my BCD deflated and use my fins to propel me down into the underwater world that surrounds the island of Malpelo. The first moments I am disorientated, there is no reference, only deep blue all around. I must get to the bottom before the strong currents sweep me away. Rocks appear, it is a formation called El Bajon, our destination for this dive. The current is ripping and at one moment I thought I won’t make it. Not making it means losing the dive, if you don’t reach the rock you have no choice but to drift with the current then ascent.

With all my strength I fin and reach the rock and grab hold. The dive group is scattered around the rocks, holding on as best they can. At 32 meters we wait. This is the typical routine at most dive sites in Malpelo, get down, hold on and wait. What are we waiting for you might ask? In just a few moments a school of hammerhead sharks passed overhead. 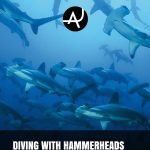 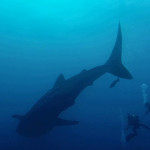 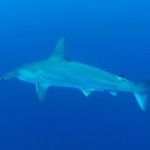 INTO THE BLUE, DIVING WITH HAMMERHEAD SHARKS

Schools of hammerheads are why divers come to Malpelo. The island is known for having one of the largest populations of scalloped hammerheads in the world. My first ever encounter with this shark happened here. Since that time I was hooked and became interested in learning about the schools.

A typical encounter with a school begins with spotting one or two sharks on their own. These sharks act as scouts, they make sure that the group isn’t heading into danger. Within a minute of seeing the scouts, the whole school will pass. Generally the schools are made up of females and the positioning of the sharks represents a dominance heirarcy within the group. The larger, more physically fit females stay in the center of the school and force the smaller ones to the outsides. The males dash into the center to find a mate, it’s a form of natural selection that ensures that males mate with the biggest, healthiest females, the ones that will have the most young.

On this dive the current is so strong that even the sharks have a hard time to swim against it. One shark is pushed so much by the force of the current that I think it might even swim into me! As it comes near I study it, its unique head shape, the silvery color of its body, the elegant weaving movement it makes while swimming, everything about this creature is interesting and beautiful.

At this site we are in the direct path of the sharks who travel around the island. Diving in strong currents is a challenge, there are many factors that you have to consider and wrong calculations can lead to trouble. However, as a diver the currents are your friend because they mean there is a good chance of marine life. Sharks, like other fish rely on counter current gas exchange in order to pass oxygen rich seawater over its gills to do this they swim against the current. 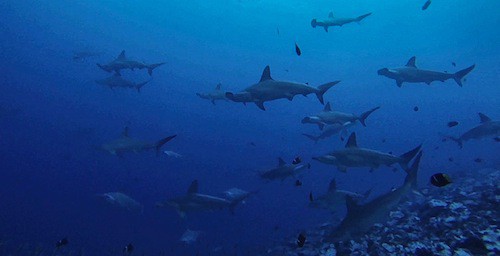 While I am enjoying my time with the sharks, my dive computer has only five minutes until no decompression time is reached. The dive masters signals to the group to let go of the rock. We let go and the current takes us and we drift away into the blue together. Nearly all of our dives in Malpelo would end this way, you drift with your dive group, surrounded by blue without reference. This can be very boring but that day we were lucky, a baby hammerhead appeared. She swam fast towards me head first then would turn sharply, eye me, then swim off in the opposite direction, she played around like this for a few minutes then lost interest.

There is an inherent danger of diving in Malpelo and it has nothing to do with diving with sharks. Here the danger is the currents and unpredictable ocean conditions. If you lose the group the currents can take you miles away from the island and it could take hours of searching to find you. If the currents don’t pull you out to sea they can bash you against the island, either option could result in a slow, painful depth.

To manage the risk of losing someone, each diver is equipped with a Nautilus lifeline, a VHF marine rescue radio. These radios are designed so they can be taken underwater, however you can only open the case on the surface. It has three buttons, a green one, an orange one and a red one. Press green to talk to the small diving boat and the main liveaboard boat. Press the orange button to talk to any boat in a close radius. Press red as a last resort, this will send a distress SOS signal. The radio is equipped with GPS which allows you to read your coordinates to anyone who is willing to help find you.

As you have probably guessed Malpelo is not a place for beginners, you must be in control of yourself at all times, the conditions are unforgiving and the consequences of an error can be life threatening. A group of divers was wary from all the strong currents, as one divemaster puts it best,

“This is Malpelo, there are no “hello kitty” sites. You have to be aware of what you are getting yourself into when you sign up for a trip here.”

Aside from the currents you have to also consider that most dives are just above the recreational depth limit of 40 meters (132 ft). You have to be comfortable with deep dives and understand the risks that it entails.

Here in Malpelo I discovered a profound level of respect for the ocean. As I watch the waves crash over the rocks resulting in white foam I think of the immense power of the sea, it is beautiful and something to be always aware of. Every time I enter the water I remind myself of the risks that the dive entails and while you can do all you can to prevent an accident you have to put yourself at the mercy of the ocean.

The rewards for the challenges of diving Malpelo is huge. When I think of my dives here, so many great moments pass through my mind. One of my favorites was when we spotted a school of hammerheads right below us. I descended a few meters, there was sharks on each of my sides and I was able to swim along with their school for a moment. 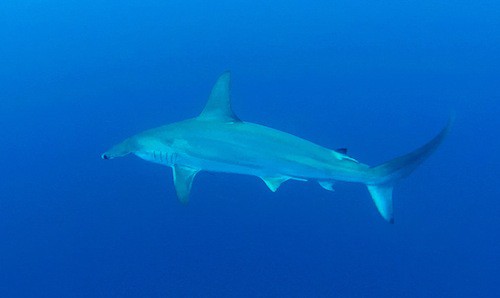 Hammerheads are not the only sharks you can see here, there are silky sharks and galapagos sharks as well. There are also some very rare sand tiger sharks that call Malpelo home. There are only a few sites in the world that you can spot this shark and even here in Malpelo it is very difficult.

There is one site called Bajo del Monstro that is known to be the home of this type of shark, the monster they call it here. It’s called the monster because its jagged teeth that shoot out of its mouth. The monster lives at over 60 meters and most sitings have been seen at 70 meters (230 ft). As we were diving on nitrox, a special gas mixture that has a higher percentage of oxygen than standard air there was an even less of a chance we would see the monster. Nitrox allows divers to extend the time they can stay at depth before reaching the decompression limits but there are certain depth limits that you should not pass. For the mixture we were using it was 39 meters so the monster would have to remain a legend.

On another dive we went to the site El Aquario, an underwater pinnacle that is great for seeing big schools of fish. To arrive to this site we had to use a line that was anchored to the top of the pinnacle because the currents where so strong that we would drift away before reaching the site if we tried a free descent. As I was pulling myself down the line a whale shark appeared. Whale sharks are the largest fish in the ocean, aside from its size it is beautiful spotted pattern makes this creature very impressive. Whale sharks are typically curious and unafraid of divers, this one was no exceptions. The group of divers held on to the line while it swam circles around us.

Aquario is a special site for me, it is where the best dive of my life took place. As we descended down the line we saw a few hammerheads. Usually by the time the whole dive group makes it down, the sharks have been scared off, that’s what I had thought would happen this time but I was wrong. Aquario has a cleaning station on one side of the pinnacle. A cleaning station is formed by butterfly fish, king angel fish and mexican hogfish. Bigger fish such as jacks, snappers and sharks enter these cleaning stations to have the parasites eaten off them by the other fish.

On this dive a large school of hundreds of hammerheads circled the pinnacle and individuals came into the cleaning station. They swam slowly while butterfly fish zip over them like a vaccum cleaner. Because the sharks had to slow down to get cleaned you get the chance to view the sharks up close.

When diving in Malpelo you never know what is going to happen. While you can have an amazing dive at one site you can return to the same site an hour later and there could be no fish. While some divers have their theories about when is the best place and time to see the schools of sharks, what I have learned in my forty dives in Malpelo is there is no pattern, you never know what you are going to see and you just have to be ok with that. Everything about this place is unpredicatable and that’s what makes Malpelo such an interesting place to dive.