It was an idea or a dream that I always had in mind. I always thought: “It would be cool to work as PADI Open Water Scuba Instructor one day”. I like diving, the sea, living next to the ocean, being in the water… and even getting pay to do that? It sounds too good to be true.

Now, in our new life as nomads we have time to do whatever we want. We want to enjoy every moment and take every opportunity that arises in front of us. Nothing is waiting for us and everything can wait at the same time. We are not committed to anything, not even to cycling. Amanda also wanted to become a dive instructor so, why not changing “one day” for “today”?

We started to look for a dive center to do our PADI Open Water Scuba Diving Instructor Course at. We were going to make a big investment so we wanted to make sure we found a reliable PADI dive center and a good Course Director. After months of emailing dozens of dive centers, talking to different Course Directors and reading reviews on the web, we decided to do it in Roatán (Honduras), at Barefoot Dive Center and with Course Director Gary Miller.

HOW TO BECOME A PADI SCUBA DIVING INSTRUCTOR IN ROATAN

The IDC (Instructor Development Course) was only 2 weeks long, they also offered us a week-long preparation previous to the actual course to review all the theory and skills we were supposed to know from the previous certification levels we had done in the past. Also because we were 2 people, we negotiated to include 5 additional specialties courses to the IdC at no extra cost. All that, together with a month of free accommodation and daily transport between the house and the dive center, looked like a pretty good deal to finally make our dream become true.

We spent a month living in the same house with our new classmates. We were eight in total, and it turned out to be a nice group. People with different backgrounds and ages, from countries all around the world but we all got along and worked together as a team to achieve what we all were here for: To become Scuba Diving Instructors. 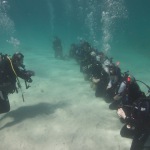 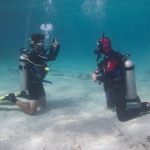 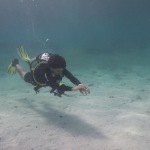 From day one I noticed that we were not going to be allowed to relax at all for the next 3 weeks. It was a bit hard for me, after living for more than a year with “my freedom” and without any “boss”, work or responsibilities. Gary was continuously testing our skills and knowledge and kept us busy with enough homework for next day, everyday. I think I’ve never done so many exams in that short period of time.

Also, he didn’t hesitate to tell us off when we didn’t do it right (which it was quite often). I don’t think his underwater shaker will last much more than a couple of IDCs each time, to be honest. Luckily for us, we also had Terry on the team, who was helping Gary teach us in order to have smaller groups at a time. Terry was also very attentive with us but he gave us a bit more slack which you do appreciate after a while. 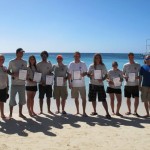 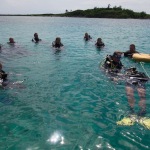 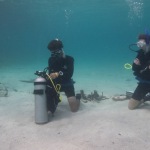 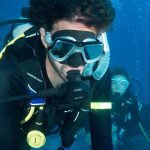 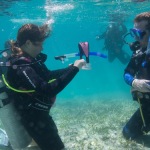 So the days went on and everything became easier and easier. The classroom presentations were flowing, skills were improving and water presentations became second nature. Gary’s shaker probably appreciated that, so it won’t need to be replaced for the next course. The 2-day PADI exams we around the corner but you could feel the group was confident about them. If nothing unexpected happened, everyone in the group should pass the exams.

And that is what happened. The Instructor Exam was a piece of cake and everyone in the group passed it. Obviously, this was due to Gary and Terry’s perseverance to make us work as hard as we possibly could during the last 3 weeks. Then it was their time to work for us, and get us all drunk during the I.E. party. They did a good job.

So what’s next? For the moment we don’t feel like going back to cycling just yet. After the course we would like to put into practice all what we’ve learnt so we will stay in Roatán for a while. Not for too long though. Maybe 2 or 3 months. We know we can’t stay in the same place for long periods of time anyway, so we’ll see. We don’t have to decide it today. We will worry about tomorrow, tomorrow.