A marine inverter converts your boat’s 12 volt DC battery power supply into 120 volt AC power. Most marine electronics run on 12 volt DC power, but having a 120 volt AC option means that you can bring your appliances from home, anything from a coffee maker to a computer, and plug them in onboard. If you want these appliances to work reliably on your boat, you’ll need one of the best marine inverters to supply their power needs!

For more of our top sailing gear recommendations, check out the Best Autopilot for Sailboats.

Want to learn more about a technical term? Check out our Features Explained section below. Need buying advice? Take a look at these Things to Consider. 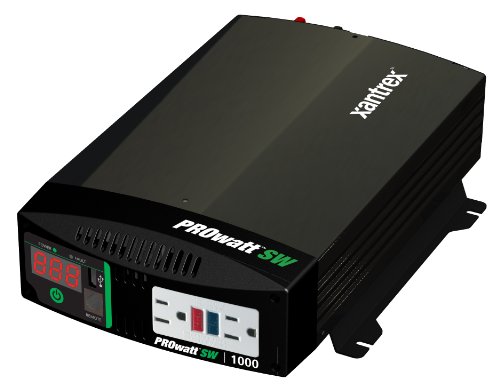 Pure sine wave inverters are more expensive than modified sine wave inverters, but this popular unit brings pure sine wave performance to the marine market at a very accessible price. That price doesn’t cut into the functions: this inverter will support electronics, dimmers, power tools, and similar devices. It’s also compact and portable and will work as well in your car or RV as it will on your boat. There’s a full suite of information and protective features and enough surge capacity to deal with startup requirements.

If you need to run devices that you aren’t willing to risk with a modified sine wave inverter, your power needs are low enough to run on a 1000 watt device, and you don’t want to spend a fortune, this inverter will meet your power needs without fuss or frills. 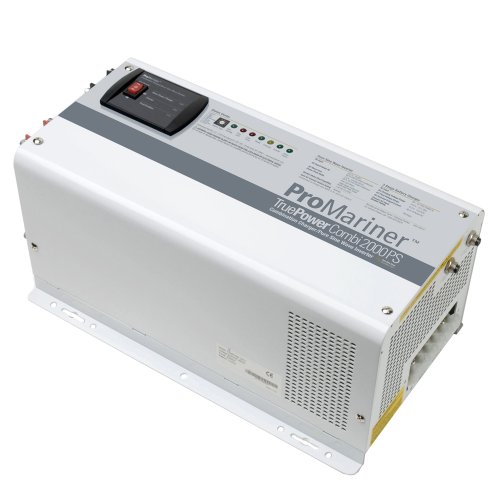 The ProMariner TruePower 2000PS steps the game up a degree. It’s almost twice as expensive as the Xantrex ProWatt SW 1000, but it delivers twice the capacity and surge protection, giving you far more options if you need to run more devices or more powerful devices. This is a fully portable unit but it can compete with many of the larger installation-oriented charger/inverters, as long as you don’t need battery charging capacity.

This inverter matches its 2000 watt running capacity and 4000-watt surge buffer with a full suite of safety features, delivering audible warnings for hazardous conditions and shutting down automatically if safe operating parameters are exceeded. If you’re at a berth and hooked up to offboard power the inverter will kick in within 30 milliseconds to deliver continuous power if the main power is cut. This is a fully-featured unit that will meet the demands of boaters who need more power capacity and expect the highest quality but who want to stick to a portable inverter. 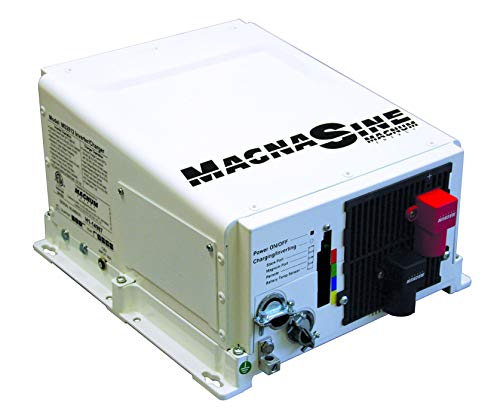 The Magnum MS2000, unlike the units reviewed above, is not portable. It’s designed to be a permanent part of your boat’s electrical system. It serves as both an inverter and a charger, turning your battery’s DC power into AC power to run hard-wired AC outlets and also accepting offboard power to charge your battery. The inverter supplies 2000 watts of continuous power, enough to run multiple appliances, with the capacity to run sensitive devices like dimmer switches and plasma TVs. The charger uses a 5-stage smart charging system to speed up charging and protect your battery.

This is a rugged unit fully suited for marine use, with a durable external housing and coated circuit boards to reduce corrosion. It will accept 12 volt or 24 volt DC power and offers a full range of safety and overload/underload protection. If you’re using shore-based power the inverter will shift to battery power and provide continuous power if the main power is cut off. This is a premium unit designed to meet the power needs of discriminating sailors with full-featured boats. 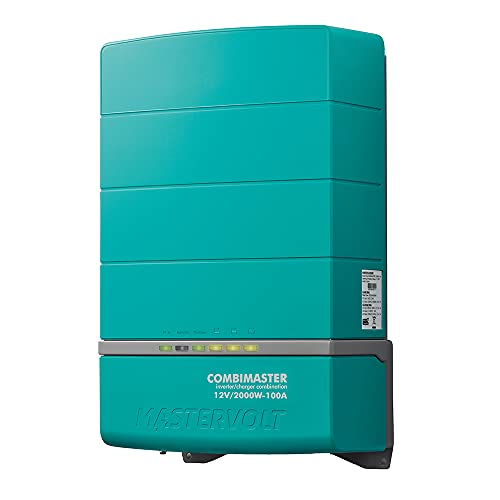 This is another inverter/charger designed for permanent installation. Power capacity is exceptional, with a full 2000 watts of continuous power and a 3000-watt peak load capacity.

This European-made unit meets stricter electrical standards than those in the US. A test by Practical Sailor magazine found that this unit’s harmonic distortion rating, a measure of how compatible the device is with sensitive electronics, was only 1.5%, lower than any other tested. Electromagnetic interference was also minimal, which reduces the possible impact on navigation or communication systems.

Aside from the very low interference and distortion ratings, this high-end inverter-charger offers virtually every feature you would expect, and some that you wouldn’t. Smart charging takes good care of your batteries and all of the safety features you need to protect your boat, your electrical system, and your appliances are there. If you want AC power in your boat and you expect to run sensitive electronics on that power, you’ll want to take a close look at this inverter/charger.

THINGS TO CONSIDER WHEN BUYING A MARINE INVERTER

Lower-priced inverters produce a modified sine wave output, which is acceptable for less sensitive devices but may yield poor performance from more sensitive electronics. More expensive pure sine wave inverters produce output that is the same as outlet power and can be used with any device. Inverter/chargers also offer the ability to receive shore-based AC current and use it to charge your batteries. Remember that no inverter will create power. You’ll have to be sure that the drain on your inverter is not exceeding the capacity of your batteries!

An inverter converts 12 volt DC battery power to 120 volt AC power. Most marine electronics and other devices designed purely for onboard use run on battery power, but if you want to use shore-based appliances on board you need 120 volt AC power, and that means you need an inverter. Inverters come in many types and sizes to meet many different needs. These are some of the common types.

Modified sine wave inverters produce AC current that mimics the characteristics of the power in your home, but doesn’t quite duplicate it. The distinguishing feature is relatively high harmonic resonance, which makes them incompatible with sensitive electronics, variable-speed electric motors, dimmer switches, and other devices that are picky about their power inputs. Modified sine wave inverters are often small and easily portable and are usually inexpensive. If your power needs are not extensive and do not involve delicate appliances they may serve your needs.

Portable inverters are small, light, and can be easily carried from place to place. They may connect to your battery system through a cigarette lighter or by direct terminals. They usually have AC outlets that you can plug appliances into and often have a USB outlet for charging mobile devices. They are often limited in their output but can be excellent choices for occasional use or on smaller vessels. They can work from any 12 volt DC power source so they can be useful in a car or RV as well as a boat.

Fixed inverters and inverter/chargers are made to be a permanent installation. They don’t have electrical outlets but are wired into your boat’s electrical system. Inverter chargers turn your battery’s DC power into AC power but they can also be wired to shore-based power and used to charge your batteries.

Safety features are built into many inverters. These often include audible alerts when a parameter is approaching safety limits and automatic shutdown when safe limits are reached. The parameters often covered often include low or high input power, excessive demand, excessive temperature, and others.

Digital readouts give you information on your electrical system at a glance. Many inverters will give you a continuous indication of current demand, remaining battery power, and other key information.

Inverter power output is measured in watts. Most inverters have a limit for continuous load and another limit for peak load. Many AC appliances deliver a power surge on startup, so those peak loads are important.

You’ll need to know how much power you will need your inverter to produce at any one time. If you have a smaller inverter you may not be able to run more than a few appliances at the same time. You may be able to run the coffee maker or the microwave, but not both!

Review your onboard appliances, look at the watt ratings, and think about what items you may need to operate at the same time. Calculate the largest total watt load you expect to place on your inverter and try to select an inverter that can accept that load, or ideally a bit more.

An inverter does not create power. The power comes from your batteries. If you buy a large inverter you may be able to plug in a lot of appliances but the load on your battery will be substantial and the battery may be depleted very quickly.

It is usually not practical to run continuous-load devices like a refrigerator or air conditioner on inverter power unless you have a very large, high-capacity battery bank. Inverters are better suited to low-level continuous loads like operating a computer or short-term higher-drain loads like running a coffee maker or blender.

Both generators and inverters produce AC power. Each has advantages and disadvantages.

Generators are not tied to your battery capacity and can even charge your battery. They are limited only by their capacity and the amount of fuel you have onboard. They are also bulky and can be noisy, and they require a substantial fuel supply that can be a fire hazard on board.

Inverters are silent, often portable, and easy to install, but they are limited by your battery capacity.

Most small boat owners prefer inverters, while generators are more often found on larger boats. Many owners of larger boats use a generator for peak loads, often in the evening, and battery charging and use an inverter during off-peak periods

Your inverter will probably be the largest single load on your battery when it is running at capacity, and your wiring should be able to handle that load. There are some places where inverters should not be installed.

If you’re not sure you know what you’re doing, consult a professional. Fixed inverter-chargers should always be installed by a qualified marine electrician.

West Marine has a useful guide to selecting an inverter or inverter/charger, and Boat US contributes its own review of inverters.

Inverters may be portable or fixed and are usually either pure inverters or inverter/chargers.

An inverter’s power output is measured in watts.

Maximum continuous power is the highest watt load that the inverter can handle on a continuing basis.

Peak power capacity measures the inverter’s capacity to handle power surges. This is an important feature because many AC appliances use a surge of power as they start.

Terminal studs are an easy, convenient, and effective way of connecting the battery to the inverter. Some portable inverters are set up to draw power through a cigarette lighter, but this may cause uneven power input.

Many inverters use a system of audible alerts and automatic cutoffs for safety. An audible alert sounds when a monitored parameter is nearing an unsafe level and the device shuts off automatically when the safe level is exceeded. The measured parameters may include input power, power load, operating temperature, and others.

Some inverters accept remote control systems that allow them to be turned on and off or monitored from a distance.

Inverter/chargers usually have customized charging systems that deliver different power levels at different stages of charging. This charges the battery faster and extends its life.

For more of our top sailing gear recommendations, check out these popular articles: