The fat bike story began with snow. The first modern fat bikes were assembled in Alaska by riders who joined twin rims together to get a double-width wheel that allowed them to float over snow and hold traction on slippery surfaces. Fat bikes have soared in popularity since those days, and riders have discovered that they work as well on roads and trails as they do on snow and sand.

As fat bike riders diversified their riding, they started using different tires for different conditions, and many stock fat bikes now come with tires that are more suited to road and trail use than to snow and ice. If you want to get back to the roots of fat biking and take to the winter trails, you’ll need tires designed for that environment. We’ve made that choice easier with this list of the best fat bike tires for snow.

For more of our top bike gear recommendations, check out the Best Fat Bike Tires.

A snow-capable all-purpose tire may suit some riders, but if you’ll be taking your fat bike onto serious snow and ice, you’ll want to step up to an ultrawide studded tire. The Vee Rubber Snowshoe lives up to its name and gives you a fully winter-specific tire at a moderate price point. The Snowshoe features tightly spaced center knobs to keep rolling resistance low on the way to the trail with wide, square shoulder lugs to bite and give you control on the corners. The feature you’re most looking for, though, is the array of studs, designed to lock on and give you a solid grip on the slickest ice and packed snow.

Be aware that the studs will increase rolling resistance and produce some noise if you’re riding on pavement, and of course you’ll want to check the frame and fork clearance on your bike before you install these. They are a genuine 4.8-inch superfat tire, and not all fat bikes are designed to accommodate that much rubber! 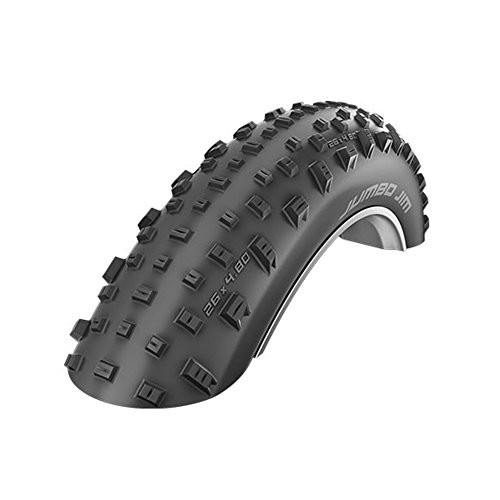 If you like the occasional ride on snow but don’t want the hassle of changing your tires every time you go for a snow ride, the Jumbo Jim is a great choice. It’s an all-around fat bike tire that can handle any surface but also has strong winter riding capabilities and snow-specific features like a loose tread pattern that won’t choke up with packed snow.

You won’t get the snow performance that you would expect from a dedicated studded snow tire, but that’s not the point. This is a snow-capable all-purpose tire that gives you some of the best overall performance you’ll find in a fat piece of rubber, and won’t let you down if you decide to take it for a ride in the snow!

45NRTH is synonymous with winter tires: the Minnesota-based company is built around fat bike tires and winter gear is their specialty. The Dillinger 5 is their premium winter fat bike tire, and it delivers performance to match its substantial price tag. The key selling point here is the unique concave studs, which provide extra durability and increased bite on slick surfaces. Some aficionados prefer to order the tires with a stud installation kit and install the studs in their own preferred pattern, but if you’re looking for top performance in a full-on winter tire that arrives ready to install, the factory studded version will do the job just fine!

It’s hard to find a downside to this tire, but if you’re on a tight budget, you’ll notice one fast enough. These are not the cheapest tires in town, but if you’re taking to the trails in winter and you want the security of knowing you’ve got the best, you won’t find a better option. 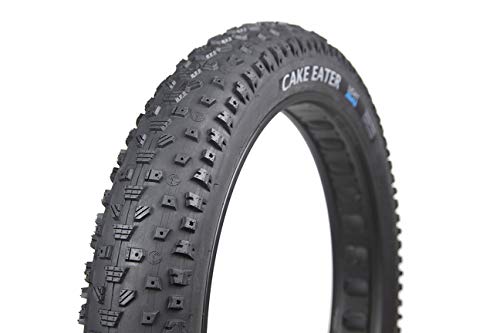 When winter comes and the riding turns to snow and ice, most riders slow down, look for maximum control, and focus on staying upright. And then there are the others, the ones who see snow and ice as an invitation to see just how fast they can go on a less than optimal surface. If you’re one of those others, here’s your tire. The Cake Eater combines a low, fast-rolling center tread with tall, edgy side lugs for confident cornering. The tire is available in studded and unstudded versions in several sizes, but for speed on snow and ice, you’ll want the 4.6” studded version!

While this is unquestionably a fast tire and a great choice for fast riding, many reviewers comment that it’s at its best on packed snow and groomed winter trails, and is not as comfortable plowing through new or deep snow. It’s ideal for riding at speed on established trails but less suited to backcountry exploring. Consider the riding you’re likely to do before buying! 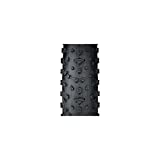 If you’re looking for a winter tire that gets the job done without costing a fortune, this is it. Maxxis has been a major mountain bike tire manufacturer for many years, and all that experience is immediately visible in the Colossus. The wide tread pattern is designed to avoid accumulating packed snow and the tall knobs cut through to grip the ground beneath. These extra-wide tires are designed to be run at minimal pressures, further enhancing their ability to grab the ground even in loose, slippery conditions.

Reviewers note that the Colossus rolls surprisingly well on hard surfaces, which is important if you need to ride roads to get to your trails, and are easy to keep on track even in slippery or rutted conditions. A non-studded tire will never have the same grip on snow and ice of a studded tire, but studded tires are exclusively for snow and ice. These make a great choice if you’re looking for a tire that can handle snow and also double up as an all-around trail tire.

THINGS TO CONSIDER WHEN BUYING FAT BIKE TIRES FOR SNOW

Manufacturers make a range of snow-oriented fat bike tires, and your choice will depend on the riding that you’ll be doing. If you expect to ride mainly on streets and dirt with an occasional foray onto snow, you’ll probably want a snow-capable all-purpose tire, usually designed with widely spaced tread to avoid snow packing in between the lugs and sending you skidding all over the trail! If you’re planning to make snow and ice riding a major part of your biking life through the winter months, you’ll be looking for a studded tire that gives you a solid grip in even the slickest conditions. Whatever your needs, you’ll find something to fit on the list above!

Not all fat bikes will accommodate all fat bike tires. Snow-specific tires tend to be at the wide end of the fat bike range, often approaching 5” in width. Check the specs of your bike’s fork and frame to make sure the tires will fit!

Some snowy areas have an established winter riding scene with miles of regularly ridden trails that are well groomed with packed snow. These present a very different riding environment than exploratory rides on deeper snow. Think about where you expect to ride before choosing your tires!

Bike tires seem like simple devices, but a lot of thought goes into their design. Width, weight, tread pattern, and grades of rubber all affect tire performance. REI and Teton Gravity Research present good all-around guides to mountain bike tires. Icebike has a good guide to winter tires and how to choose them. The more you know about tires, the easier it will be to choose the right tires for you!

Fat bikes use tires more than 3.8” wide. Tires designed for snow or sand riding may be as much as 5” wide, but not all fat bikes can accommodate tires this wide. Check the manufacturer’s specs for the maximum tire width on your bike. Some tires may not be as wide as their official rating!

Metal studs implanted in a tire’s tread have been used for years to give tires better grip on ice and packed snow. Studded tires used to be heavy, and riders complained that they were noisy and wore out quickly if used on paved roads. Modern studded tires have addressed many of these problems: aluminum carbide studs are very light and durable, and while they won’t be anyone’s top choice for road riding, they are not a major liability on the road.

Some tires may be offered with stud kits, allowing riders to install studs in customized patterns. If you enjoy DIY activities and have some time to spend, you can create your own stud patterns.

Tubeless tires have no inner tubes and use a liquid sealant to plug holes from the inside. Fat bike inner tubes are large and heavy, sometimes over a pound apiece, so tubeless tires can make a bike significantly lighter and save the hassle of changing a tube every time a tire is punctured.

Most bike tires distinguish between the center tread, which is in continuous contact with the surface you’re riding on, and the side tread, which only engages when you turn. Many tires use a lower, more closely spaced tread in the center to minimize rolling resistance on flat surfaces with more aggressive side tread to give traction on turns. Many snow-specific tires have high knobs designed to cut through packed snow and grip the surface beneath. Snow-specific tires also tend to use a widely spaced tread that will shed sticky snow instead of letting it pack in between the knobs, which reduces traction.

Tires not designed for winter use can become hard and brittle in the cold. Winter-specific tires use rubber compounds that are specially formulated to stay pliable and soft at very low temperatures.

For more, check out these popular buyer's guides: